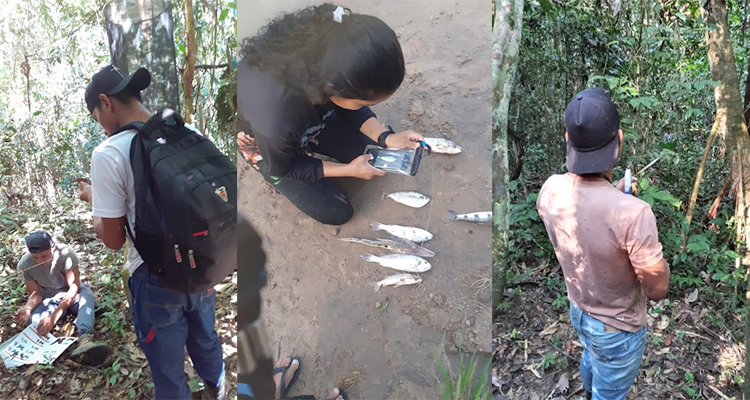 The community-based monitoring actions implemented by the regional projects Amazônia 2.0 (A2.0) and Integration of the Protected Areas of the Amazon Biome (IAPA) in the Chandless State Park, in the state of Acre, have come to an end after 6 months of sampling.

The monitoring takes place within the framework of the synergy between the aforementioned projects and the National Biodiversity Monitoring Programme (MONITORA), implemented in the Chandless Park by the Acre State Secretariat for the Environment and Indigenous Policies (SEMAPI-AC), through funding from the Amazon Region Protected Areas Programme (ARPA).

The main objective of the programme is to monitor the condition of the biodiversity within the natural protected areas, mainly observing indicator taxonomic groups that are relevant for guiding the decision on preventive and mitigating actions for the effects of climate change. The Chandless Park has added four years of sampling of three targets considered of quick response and easy sampling: frugivorous butterflies, diurnal mammals and game birds, and since June 2021, with the contribution of the A2.0 and IAPA projects, woody trees, pressures and threats and fish resources have joined the monitoring targets.

Luiz Henrique Medeiros Borges, Monitora coordinator in Chandless since 2017 says that the integration of initiatives pointed to more robust sampling designs, data collection and management. In addition, it optimized the logistical and operational effort of reaching isolated areas of the Chandless Park, located on the border between Brazil and Peru, with more than 690,000 hectares, which represents an area with about 4% of the territory of Acre.

As a preparatory action for the monitoring, a Training Course was held for 10 monitors (three of them women), selected. The course was held in June and focused on training the monitors and included theoretical classes on the use of Field Task applications (used by A2.0), Ictio (prioritized by IAPA) and field practice with simulated monitoring. 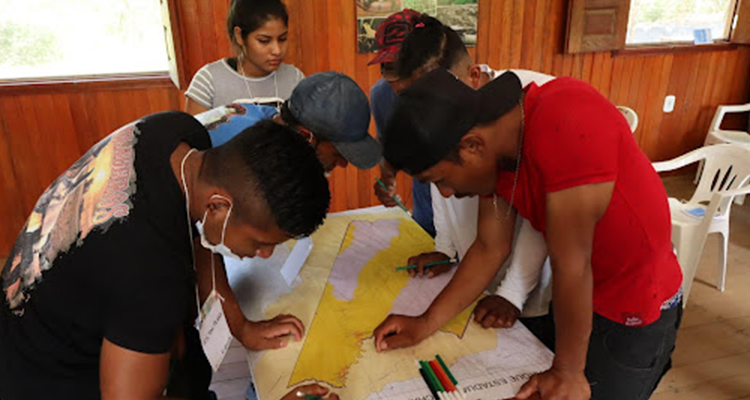 As for the data collected under MONITORA, the diurnal mammals and game birds targets are considered crucial, since these groups are susceptible to threats such as habitat loss and degradation, hunting pressure, and likewise, to climate change. A total of 26 species of diurnal mammals and 17 species of gamebirds were recorded. Similar data to previous studies indicate that the Park successfully plays its role in the conservation of the group, protecting even species considered vulnerable to the threat of extinction.

The target of frugivorous butterflies is the one that presents immediate response to more subtle changes in the environment, whether they are changes in vegetation cover, deforestation, seasonal variations as a consequence of climate change, generating responses on the tribes (taxonomic organization between families and genera) of butterflies sampled. In this case, in the Chandless Park all 13 tribes of butterflies that are predicted to occur in the locality were recorded, portraying the high diversity of local groups, a reflection of the heterogeneous and well-conserved habitat of the protected area as a whole.

As for the vegetation structure, referring to the target of woody plants, in all, 718 woody individuals of three life forms (lianas, palms and trees) were sampled in three sampling units with (1) upland rainforests under the effect of alluvial environment, (2) under local relief characterized by a lowland area, predominated by Marantaceas in the understory and with the presence of bamboos of the genus Guadua sp. and with few large trees; and (3) with adjacent signs of Gadua patches and marked by the local predominance of diverse palms (including Phytelephas spp.), indicating a successional process marked by recent disturbance and/or local environmental characteristics (i.e. local relief, soil texture and soil chemical properties).

On average, based on the permanent plots sampled, the density of trees is 598 individuals per hectare, demonstrating that the absolute density and carbon stock (with basal area and absolute density as an indicator), respectively, in the Park are 38% and 40% greater than observations in local literature. It is estimated that each of these forests, "absorb" on average, about 250 mg C ha-1, and between, 150-250 tons of carbons per hectare, indicating a region of high productivity and relevant carbon sink.

The second biodiversity monitoring action deals with the fishery resources of the IAPA project, more specifically the monitoring of large catfish. Activities kicked off in 2018 with meetings and capacity building. Institutional meetings were held to establish the cooperation agreements as the main regulatory frameworks of the initiative. Recently, new capacity building and training in the use of the Ictio digital platform, in addition to the availability of smartphones boosted the monitoring actions of fish resources in the Chandless State Park. In all, considering the records obtained since 2018, 160 fishing records of the residents are accumulated, great results when we evaluate the conditions of isolation, limited internet access and challenges inherent to the monitoring routine. In addition, biodiversity monitoring in the Chandless State Park is performed by young monitors and women who have taken ownership of the surveillance and territorial management processes. 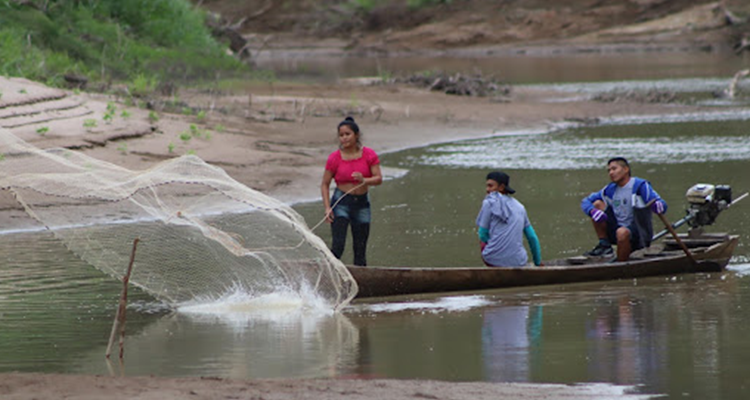 Monitoring of catfish and pressures and threats. Photo: Luana Alencar, 2021

Finally, regarding the monitoring of pressures and threats within the scope of A2.0 territorial surveillance actions, after six months of monitoring 11 situations were detected by the local monitors, emphasizing the project's first surveys that already indicated pressures from illegal hunting and fishing, invasion of territory and predatory removal of yellow-spotted Amazon river turtle (Podocnemis unifilis) eggs. 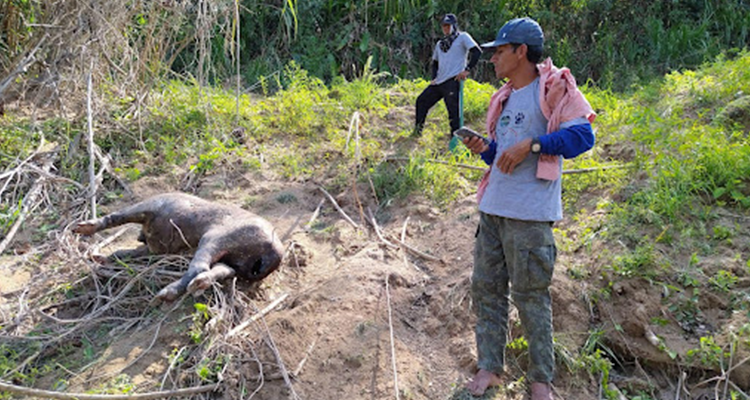 "The purpose of this integration has always been to strengthen participatory monitoring actions in the Park: to value the role of the monitors, citizen science, to expand the monitoring coverage area and from the data and information generated - first-hand by the local population - to contribute to the strengthening of Park governance; guiding, in turn, decision-making by the competent public agencies, both management and enforcement, and for greater participation of the local community in Park governance processes," emphasizes Carolle Alarcon, technical coordinator of the A2.0 project in Brazil.

Walter Cano, technical coordinator of the IAPA project also adds that "in the Purus region, both on the Brazilian and Peruvian side, fishing represents an important complement to the subsistence of a large contingent of riverside populations that depend on the hydrobiological resources of this river. Among these populations are more than 7 indigenous ethnic groups who, through shared management agreements of large catfish with the chiefdoms of the protected areas Alto Purus National Park (in Brazil) and Purus Communal Reserve (in Peru), hope to guarantee the sustainable use of ancestral resources. In turn, the aforementioned chiefdoms hope to reach shared management agreements with their counterpart in the Chandless Park, to achieve a transboundary vision of shared management of large catfish of broad benefit to local populations and conservation."

The results presented reveal that actions to monitor and strengthen territorial management in protected natural areas bring relevant gains for biodiversity conservation and the livelihoods of local populations. However, the continuity of actions is relevant, since the practice of monitoring and recording must be constantly encouraged. The administration of the Chandless State Park has committed itself to continue monitoring the pressures and threats within the scope of the Monitora Programme. In addition, the results of the work will be formally presented to SEMAPI-AC in early December and the monitoring data will be available on GeoVisor, a dynamic and integrative tool that articulates the information collected in each of the A2.0 project's intervention areas, as a result of the long process of local capacity building and implementation of community monitoring.