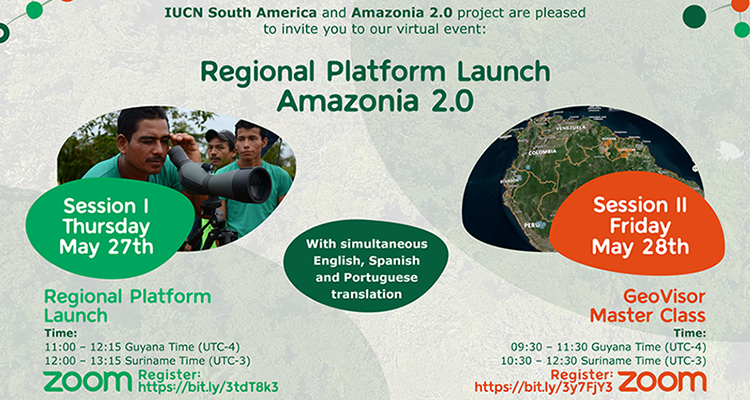 On May 27 and 28 of 2021, the official Launch of the Amazonia 2.0 Regional Platform took place in two virtual sessions open to the public.

This event was held after completing two successful cycles of training workshops on the use of the GeoVisor, one of the technological tools that are part of the A2.0 Regional Platform. The first cycle of workshops, conducted in Spanish and Portuguese, hosted 80 participants, while the second cycle, conducted in English, had 20 participants.

The first session of the A2.0 Regional Platform Launch, held on Thursday May 27, consisted on a protocol event with the presence of key project stakeholders, including interventions by Tania Ammour, Regional Programme Coordinator of UCN Regional Office for Mexico, Central America and the Caribbean (ORMACC), and Robert Steinlechner, Head of Cooperation of the European Union Delegation in Peru.

It also included a presentation on the Amazonia 2.0 project and the functionality of the different components of the platform, by Braulio Buendía, regional coordinator of the project, and Alejandro Imbach, part of the A2.0 regional team. This session was attended by more than 200 people via Zoom and Facebook Live, from more than 15 countries of origin including our 6 countries of intervention -Colombia, Ecuador, Peru, Brazil, Suriname and Guyana- and others such as Bolivia, Venezuela, the United States, some Central American and European countries, among others.

The second session, held on Friday May 28, was a Master Class on the use of the A2.0 GeoVisor. This two-hour long session showed the main uses and functions of this public and free tool. The class was given by Sylvia Villacís, Geographic Information Systems Specialist of the EcoCiencia Foundation, implementing partner of the project in Ecuador, who also leads the administration of this Geovisor. More than 160 people participated in this class via Zoom and Facebook Live, also from more than 15 different countries, including people from other Central American countries, the United States and Europe, in addition to the A2.0 intervention countries.

The Amazonia 2.0 Regional Platform brings together social and technological components, it is open to the general public, and integrates the project's implementation methodology, which we hope can be replicated, scaled-up and used by different actors. The training cycles and the virtual launching event are part of a strategy to show and share the knowledge and tools generated by Amazonia 2.0, in the hope of giving sustainability to what has been achieved.